You have no items in your cart. Want to get some nice things? 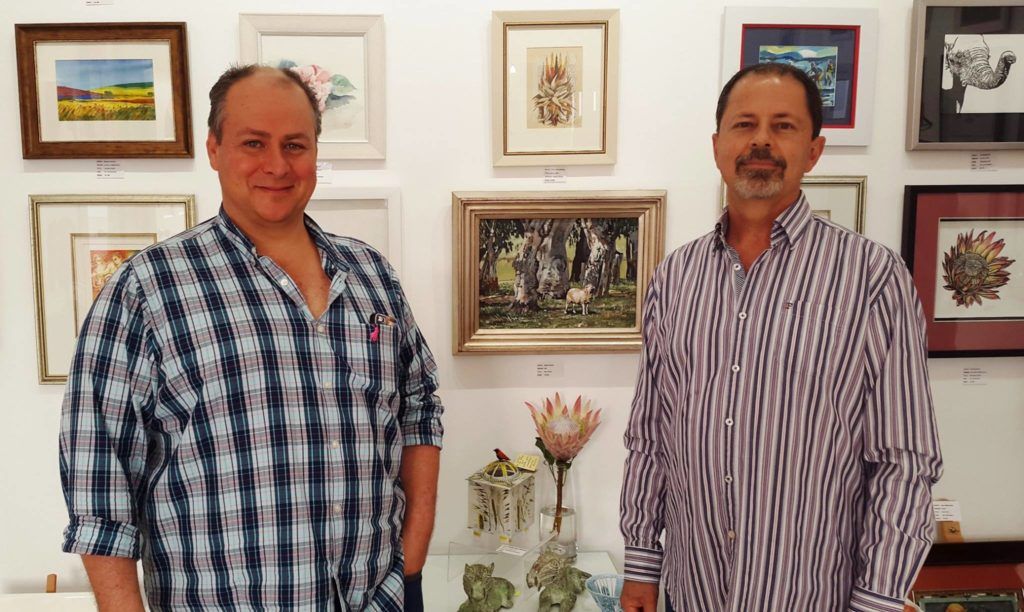 We are both originally from Zimbabwe and met there in 1996 – we were introduced by mutual friends who were both tragically killed in the 2004 Boxing Day tsunami. When we met, Ian was working in the photographic safari industry and Ed and his mother owned and operated an interior decorating business. For several years we managed to combine both aspects of our lives. We lived at a beautiful lodge in the wilderness area of Matobo Hills, outside the city of Bulawayo in southern Zimbabwe. At that time, the tourism industry in Zimbabwe was booming and we were involved in the design and refurbishment of several lodges as well as the international marketing of a large safari company. One of the lodges we were involved with was Lodge at the Ancient City – a spectacular property overlooking Great Zimbabwe – the ruined 15th century stone capital of a once powerful trading empire. In order to create appropriate fabrics for our custom designed furniture for the lodge, we began experimenting with fabric dying techniques. In time, that lead us to establish Lembu Crafts – a small company that produced hand dyed and hand printed fabrics.

In early 2000, Zimbabwe’s political turmoil exploded and in 2001 our beautiful thatched home in Matobo Hills was burnt down. We moved into Bulawayo for a while but in 2003, with the writing very clearly on the wall, we made the decision to emigrate. We went first to the Seychelles but struggled to get the necessary work and residence permits and in 2004 we settled in the South African coastal village of Hermanus, an hour from Cape Town. Here we set about re-establishing Lembu Crafts. Working initially from a cramped garden shed, we began to produce a range of hand printed fabrics – wall hangings, table runners and cushion covers – that we supplied to a number of retail outlets across South Africa. In 2007, with Lembu Crafts fully operational, Ed began to paint full time, selling his work at several galleries in Hermanus, Franschhoek and Cape Town. In 2010 we made the decision to open our own gallery – ‘Lembu Gallery & Studio’. By that stage we were employing eight local people who were involved in the production of our hand printed fabrics. The new gallery featured a lower level retail area and an upper level studio; this meant people were able to see the fabrics on display and then go upstairs to see the production process. Ed’s paintings were prominently displayed and he began to develop a following for his dramatic ‘Red Elephants.’ Over time we were able to slowly increase the range of products we displayed in the gallery and began to establish relationships with a number of craftspeople and traders. By 2013 Lembu Gallery & Studio was rated on Trip Advisor as the number one shopping destination in Hermanus.

In 2015 we relocated from Main Road Hermanus to a one hundred year old fisherman’s cottage on Harbour Road, in the heart of the village. These new premises did not have space for the fabric printing studio and so we re- established this operation around the corner in Warrington Lane. Shortly after this, we opened a new gallery, ‘Forty x 40’, this small gallery also served as our combined studio and became an important space for Ed to showcase his work. We were able to stock a wide range of fine crafts and other products in the gallery and by this time had established relationships with a number of traders from West and Central Africa. This meant that we were able to source African artifacts from across the continent and by being careful with our choices, we developed a reputation for displaying an outstanding range of masks, statues and tribal jewellery. We have both long had a passion for African art, this was nurtured early on in our relationship by our friendship with Steve and Clive, our dear friends who were killed in the tsunami. Steve was an ardent collector of African artifacts long before it became fashionable and following his death, his family bequeathed to us his collection, which we still treasure dearly.

We took great pride in Lembu Gallery & Studio and constantly received praise from visitors for the manner in which merchandise was displayed and for the general ambiance in the gallery. We worked hard to stock superb quality items and were constantly on the lookout for unusual fine arts and crafts and in doing so fostered good working relationships with various artists, ceramicists, photographers and sculptors.

The Covid19 pandemic has had an enormous impact on the South African tourism industry and it is anyone’s guess when international tourists will return to the country. As a result, we took the tough decision to close Lembu Gallery & Studio and to establish an online shop; in this way we hope to be able to continue to offer a wide range of fine South African and African arts and crafts to customers both old and new.